The Politics of Design: A (Not So) Global Manual for Visual Communication 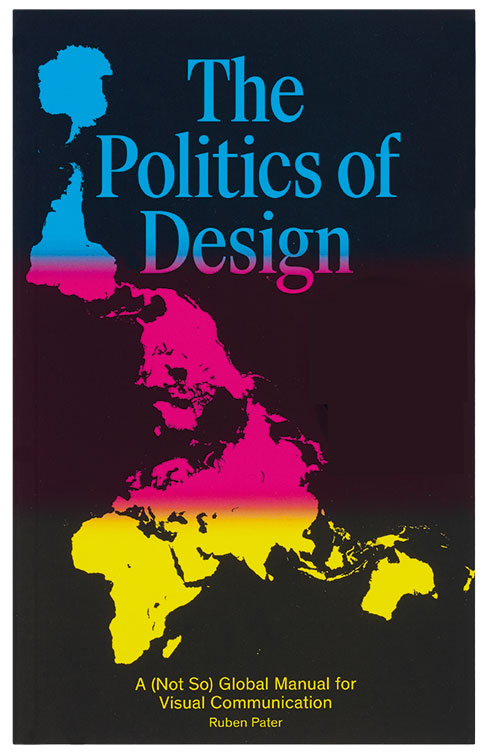 I have a shelf full of books preaching sermons clearly addressed towards the choir of those already converted by the gospel of design’s socio-political potential. Dutch designer Ruben Pater’s pocket-sized The Politics of Design plays an entirely different game. This is a small book that makes one big claim, spelled out in oversized letters from the start: ‘This book is not about the design of propaganda or political parties. Rather it acknowledges that all design is political.’

The 58 short sections shoehorned into the diminutive book’s 192 pages are organised under headings corresponding to formal graphic design principles: ‘Language and Typography’, ‘Colour and Contrast’, ‘Image and Photography’, ‘Symbols and Icons’, ‘Information Graphics’, grounding itself in everyday practice. This structure subtly reinforces the core message that even the most banal aspects of graphic design practice are deeply and significantly political.

Each short article provides an interesting snippet of design knowledge. There are sections here addressing topics such as: perspective, colour psychology, reading images, maps, graphs, the distinction between pictographs and ideographs. These are subjects that might be covered in any basic manual for visual communication. Sometimes the political dimensions are obvious, at other times less so. The editing out of all females from images in the 2010 Saudi Arabia edition of the IKEA catalogue raises issues of cultural difference and gender representation, but takes on a new level of meaning when the reader connects this to an earlier piece in which executed individuals retrospectively ‘disappear’ from photographs alongside Stalin and Kim Jong-un. Digested in isolation, an article on subjectivity in colour perception seems to lack any explicit political significance. A later piece discusses how Kodak film was originally calibrated to best display white skin tones. Making a connection between these two, the full political significance of the apparently neutral subjectivity of colour perception becomes apparent.

The book is by no means perfect. The writing can be clunky at times, and the layout and typography are likely to divide opinion. The political implications raised throughout the book almost exclusively relate to issues of colonialism, racism and sexism. Without doubt these are significant political issues, and bringing them to the forefront of designers’ minds can only be applauded. However, the political significance of graphic design goes far beyond these specific concerns.

Pater openly recognises that the book is limited to addressing only a fraction of the political challenges inherent in visual communication. He proposes that the book’s accompanying website (thepoliticsofdesign.com) could serve as an archive of examples and a point of reference for designers to continue and expand conversations stimulated by the book. However, the website currently feels like a token gesture, sparsely populated and irritatingly designed. The value of this book is not in proposing that we need more examples of political design to inspire us towards good deeds. Rather, it is in holding up a mirror that allows us to examine critically our own practice to find the political dimensions that have always been present but which we have been blind to.

Unlike the stack of design-for-politics books sitting on my shelf, The Politics of Design is not primarily a celebration of the good things that design can do when designers put their minds to it. Rather, it offers a warning to remain always vigilant against the bad things design can do when designers fail to think through the political consequences of their design decisions.

Top: Cover of The Politics of Design.

Eye is the world’s most beautiful and collectable graphic design journal, published quarterly for professional designers, students and anyone interested in critical, informed writing about graphic design and visual culture. It is available from all good design bookshops and online at the Eye shop, where you can buy subscriptions, back issues and single copies of the latest issue. You can see what Eye 93 looks like at Eye before You Buy on Vimeo.

The Politics of Design, BIS Publishing